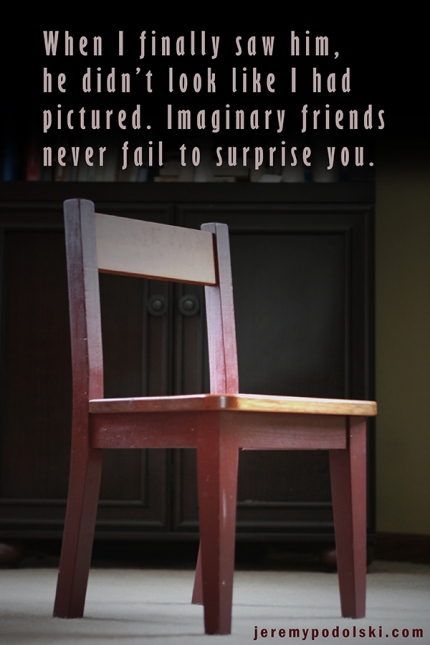 Flash fiction for your inner child by Jeremy Podolski

Eli snapped the frozen stalactite from its moorings on the gutter overhead and raised it in a fencer’s salute, eyes fixed on Sasha.

“Olé!” he offered before attacking the space in front of her with a flourish, like a maniacal poet inking stanzas in the cold, empty air.

Sasha’s shrug was hardly visible through the winter parka and layers of knit sweaters keeping her warm, but she added a deliberate eye roll for good measure.

“Touché,” Eli replied with raised eyebrow. He held the tip of the icicle against the dull light of the ebbing sun, as if examining his blade for imperfections, then abruptly bit off the tip and chomped it noisily.

“You are so weird,” Sasha said, turning her back so he wouldn’t see the snowball she was shaping between her purple, fur-trimmed mittens. “What time’s the truck coming?”

“Four. But with the weather, they’ll probably be late.” He quieted then, drumming the shortened ice spear against his leg.

“You know, my iPod better not be in one of those boxes. You said you were gonna bring it over yesterday, but I never saw you.” She heaved the snowball at his chest then, and it exploded in a nebula of powder and ice. The glimmering dust settled on Eli’s dark hair and lashes, salt and pepper lending comic contrast to his young face.

“Well, you’re not getting it back now,” said Eli, straight-lipped, looking professorial. “Besides, I want something to remember you by.”

“You need that to remember me?” Sasha said, feigning injury, surprised to find she actually felt a bit injured.

“No, I’d just rather have your iPod than your ferret or your Vampire Weekend T-shirt.” He glanced around, as if looking for a place to sit, but the narrow strip of yard between their two houses was smothered in undulating, wet snow. He was glad he was still holding the icicle. It gave him something to do with his hands.

“What’s winter going to be like there?” she asked after a long silence.

“Eli!” An echoing interruption, the husky voice of his father. “Come help me with this sofa!”

“Sorry,” Eli said quietly. “I’ll drop off your iPod before we leave.”

He tossed the icicle toward her, and she clapped her mittens together, clumsily catching the tapered end while the wider base broke under its own weight and disappeared into the drift near her feet. She waited for him to lob an insult, the perfect opportunity to mock her and run, but Eli had already vanished around the corner of his garage, his boots now clomping on the bare concrete.

Rain instead of snow. She’d hate that, she thought. The cleanliness of the white soothed her, hid the desolation left in the wake of autumn. Snow spread like a glaze of perfection over the dead, blemished landscape. Its only drawback was its transience.

An icicle’s existence was even more fleeting – born only in the right conditions – a modest thaw, a precarious edge, a sustaining freeze. She plunged her hand into the snowbank, suddenly anxious to locate the rest of the sunken icicle. It should have been easy; the impression in the snow created by its falling was obvious. All she had to do was grab it. But as she tried to dig, the snow just compressed, becoming like ice itself, camouflaging the object to sight and touch.

The faster and more frantically she searched, the more impossible the task seemed, as if she were trying to differentiate one gallon of water in the ocean from another. Her perspiration chilled her as it mingled with the falling temperature. Sweat and melted snow soaked her mittens until she ripped them off and cast them to the ground. With her bare hands, she reached into the hole she had burrowed to find its walls as smooth and hard as glass. She scratched at them with her fingernails but only came away with thin curls of ice that bit at her numbing skin with frosty malice.

Kneeling now, Sasha looked to the gutter overhanging the side of her home. At least thirty icicles clung to the roofline, virtually identical, none more distinct than the next, but the one she wanted was trapped out of reach. For the moment, it was preserved in its frozen vault. By tomorrow, it would be a casualty of the thaw.

© Jeremy Podolski and jeremypodolski.com, 2013. Unauthorized use and/or duplication of this material without express and written permission from this blog’s author and/or owner is strictly prohibited. Excerpts and links may be used, provided that full and clear credit is given to Jeremy Podolski and jeremypodolski.com with appropriate and specific direction to the original content.